Ellen Kotrba honored as ND Librarian of the Year

Ellen Kotrba Honored as ND Librarian of the Year

The North Dakota Library Association held their annual conference virtually on October 28 and honored Ellen Kotrba as Librarian of the Year during their awards ceremony. Ellen serves as the Director for the Online Dakota Information Network (ODIN). ODIN provides a unified library system for North Dakota colleges and universities, K-12 schools, and local public libraries. Together, the ODIN libraries own a total of more than five million items, ranging from print, to electronic, and digital materials.

Ellen has had a long and distinguished career touching many different aspects of the library world since 1976, from her time at UND’s Chester Fritz Library to the past several years she’s worked within the ODIN consortium. Since her start with ODIN in 1994, she’s worked tirelessly to provide quality library services, initially as primary support to member libraries, to now serving as ODIN’s director. Additionally, Ellen found the time to serve as NDLA’s president 1997-98, coinciding with one of the most challenging times for the Grand Forks region.

She consistently believes in taking challenges and exploring new, ingenious concepts to improve library efficiency. This culminated in her leading ODIN through two large software migrations in the span of 16 months. The ODIN Academic libraries migrated to the Ex Libris Alma product July 29, 2020, and the ODIN Public, K-12 and Special libraries migrated to the Innovate Interfaces Polaris product December 11, 2019. 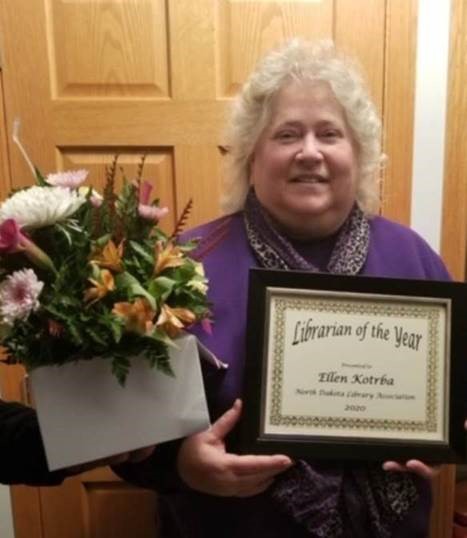